Fans First: My Love of Rick and Morty

In honor of Cryptozoic’s 10-year anniversary as a company, we’re exploring the meaning of our motto: “Fans First.” We are fans of pop culture who are dedicated to creating awesome products that fans everywhere will love. This entry is by CORY JONES, Co-Founder of Cryptozoic and creator of the Epic Spell Wars series.

I love Rick and Morty. Has there ever been an animated series that’s as mind-bending, hilarious, meaningful, and dark? It ticks a lot of boxes, that’s for sure. I was an immediate fan when it premiered in December 2013 and told everyone I could about the show. I knew it would be a huge hit. I also knew it was the perfect property for tabletop games. 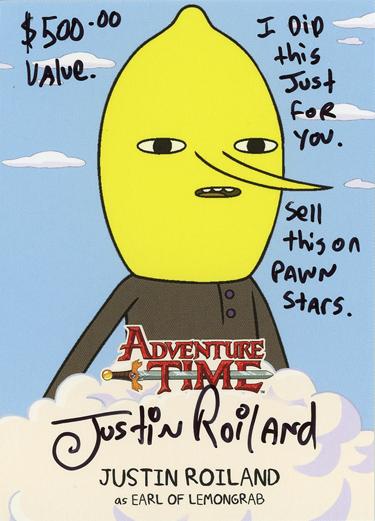 As luck would have it, Justin Roiland agreed. When he sent in his signed Autograph Cards for our Adventure Time Trading Cards product, he included a handwritten note telling us how much fun he had working with us and would love to do tabletop games based on his new show Rick and Morty.

The letter clinched it: We had to do Rick and Morty products. I got in touch with Justin and told him I was a huge fan of the show and would love to do some games; in fact, I was considering it already! When I asked Justin what he wanted in a game, he responded emphatically: “Lots of DICE!” We used that idea in our Mr. Meeseeks game (see below).

In terms of game design, I wanted to make each Rick and Morty game really unique by basing each one on a memorable episode. I knew this unusual approach would give us the opportunity to unlock the weirdness of the show without limitations (i.e., for the most part, the games were standalone). And each episode of the show just had so much to draw from.

The first episode we decided to create a title based on was “Total Rickall.” This Season 2 episode is rife with game potential, since it is about parasites who are masquerading as friends and family and have implanted fake memories to make the main character believe they’re real. Perfect for a game, right? In Rick and Morty: Total Rickall Card Game (released July 2016), you have to figure out which zany characters are real and which ones are parasites that have to be exterminated. 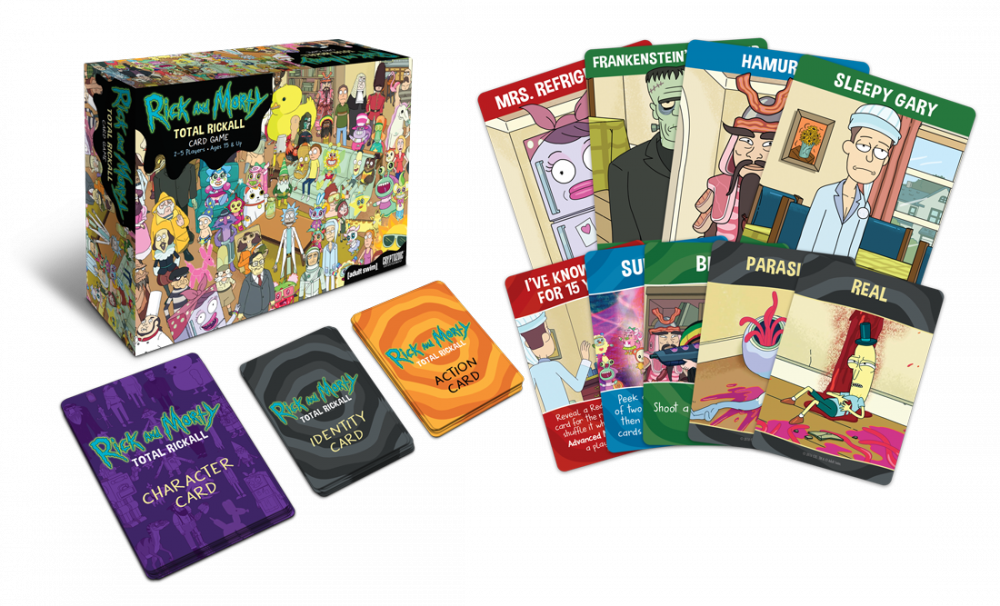 Just a few months later, we released our second Rick and Morty game, based on the Season 1 episode “Meeseeks and Destroy” (one of our favorites). Rick and Morty: Mr. Meeseeks’ Box o’ Fun — Game of Dice & Dares comes in a collectible Mr. Meeseeks box that plays snippets of dialogue by Justin Roiland as Mr. Meeseeks. In the game, you roll lots of dice (thanks for the idea, Justin!) to complete Requests with the help of Mr. Meeseeks. If you fail to complete your Requests, you have to do embarrassing Dares. Call too many Mr. Meeseeks and they will kill you. It’s loads of fun! 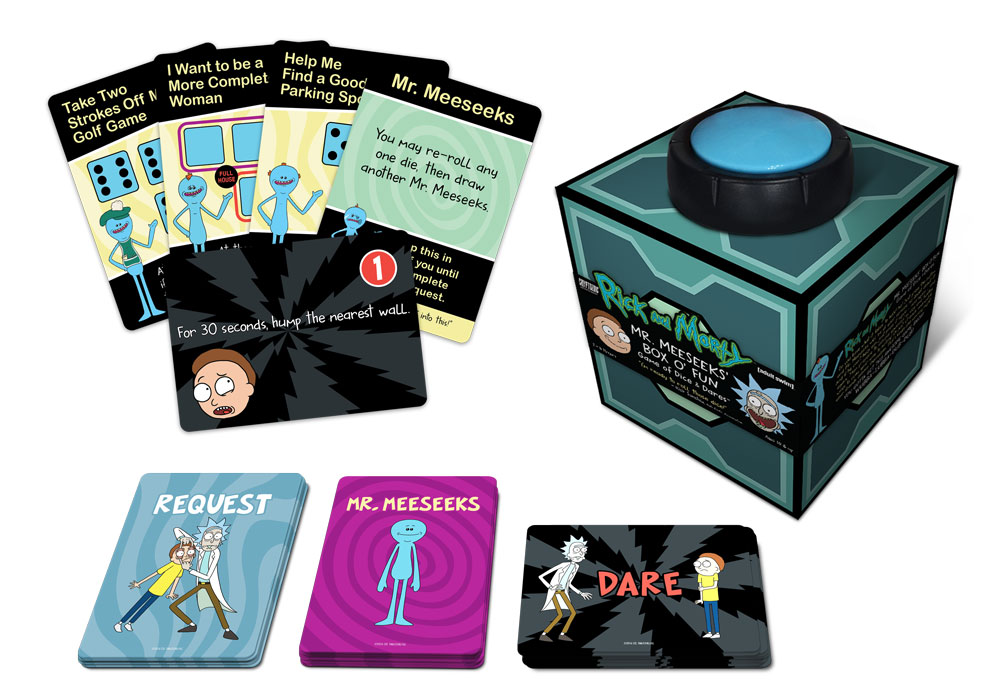 Our first two Rick and Morty titles were huge hits with fans and became some of our bestsellers ever. With that, we were off to the races, producing seven more games based on the series in the three subsequent years, all inspired by memorable episodes. We even released a game last year based on the Season 4 premiere that came out a few days before the episode aired. Whether you are a fan of deck-building, theme-park building, engine-building, roll-and-write, or fast-paced card games (or giant Pickle Rick Game Cases), we have you covered: 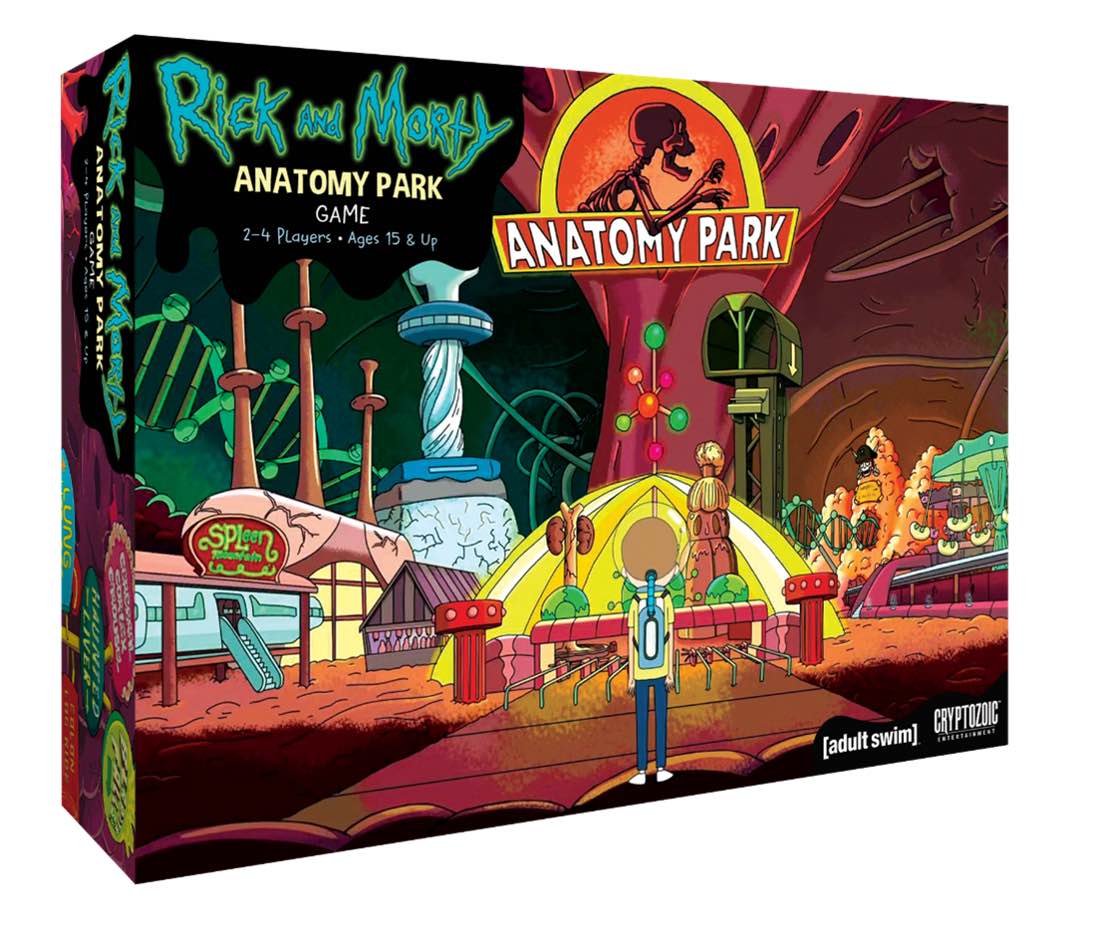 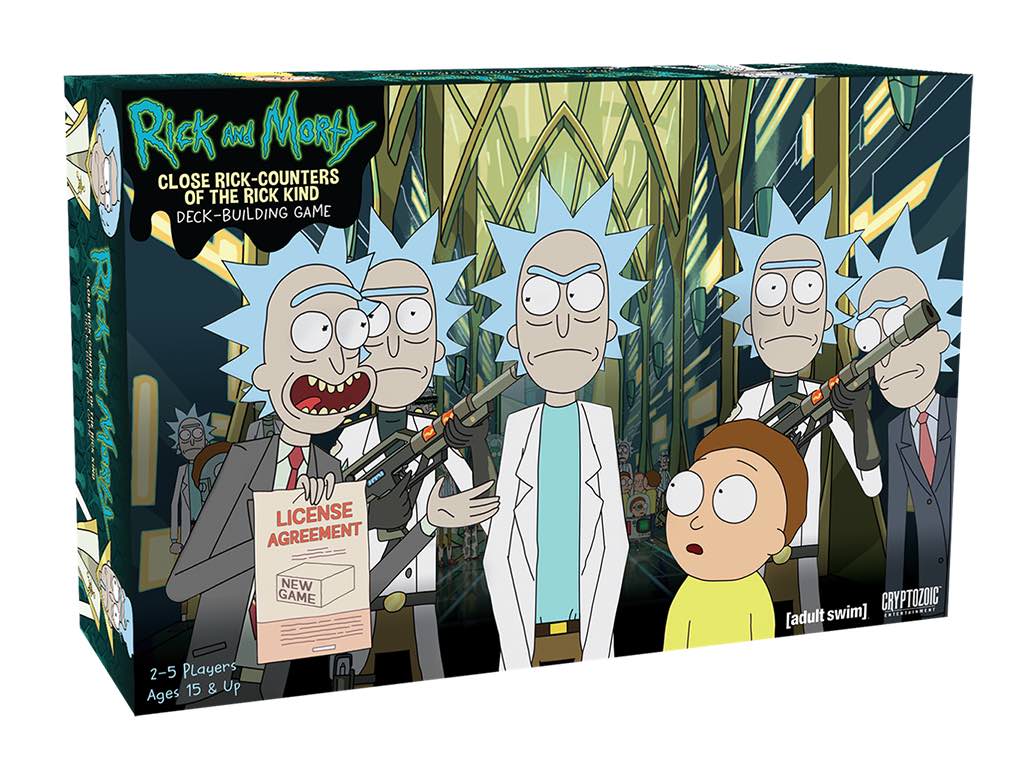 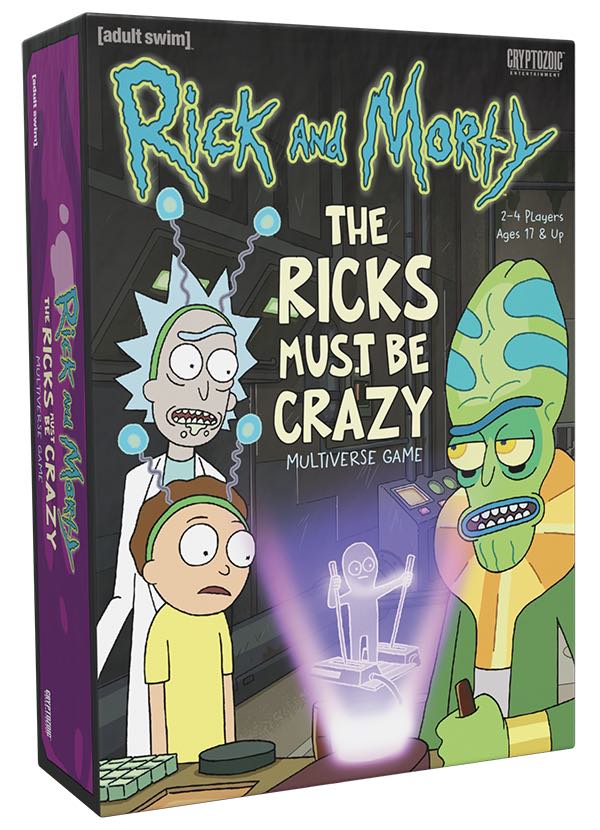 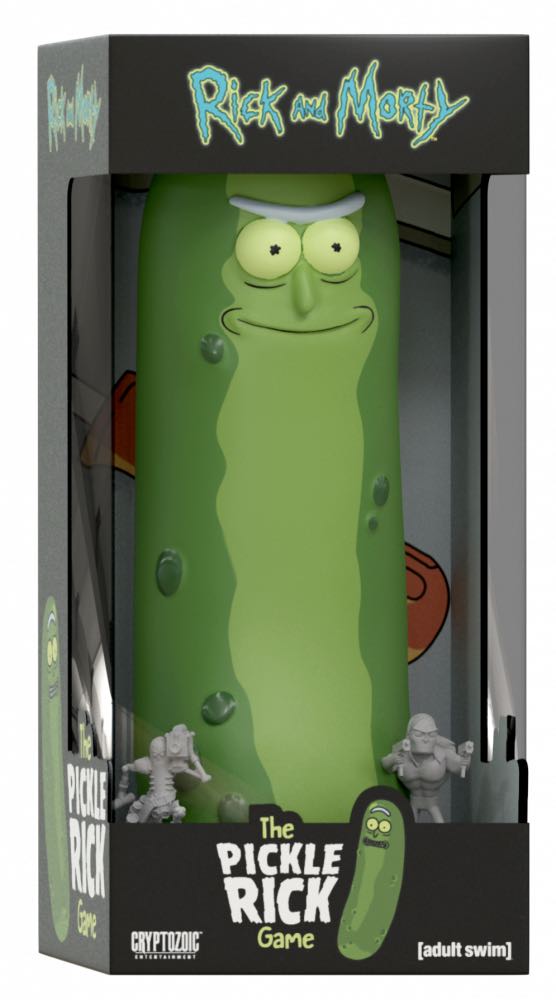 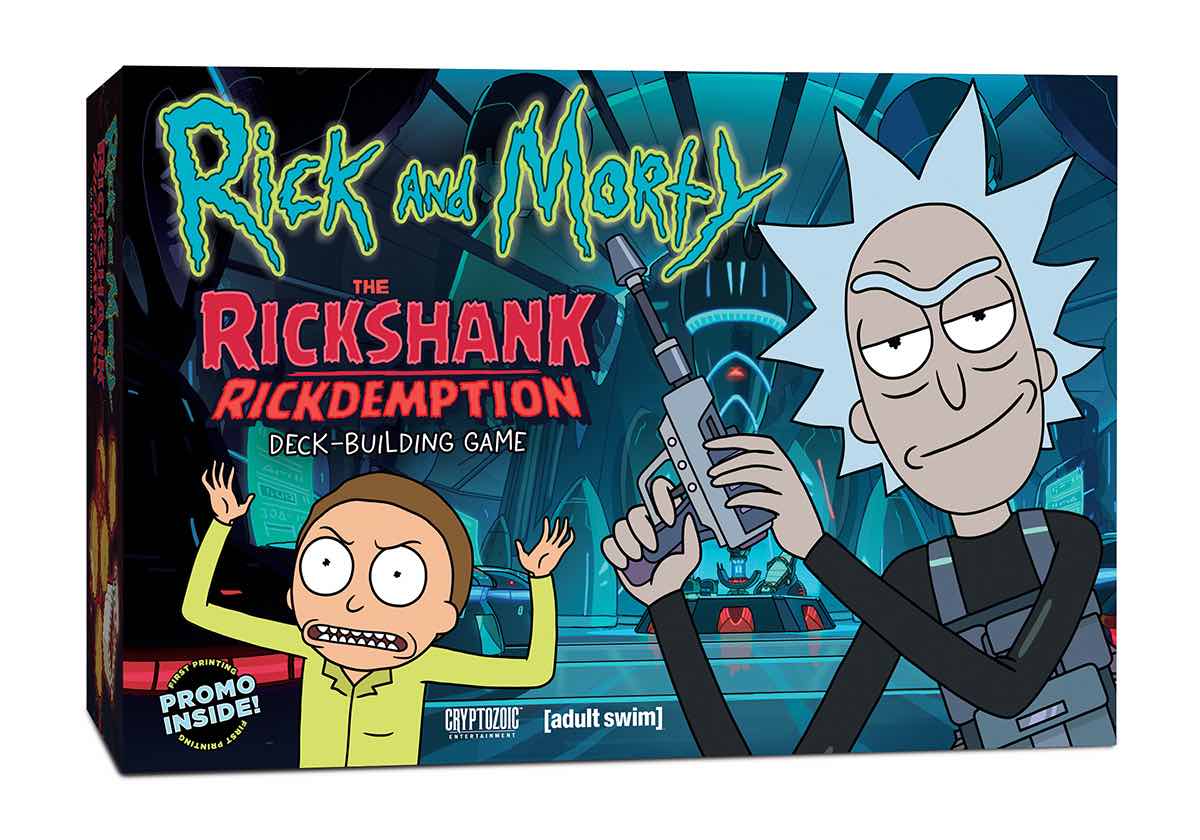 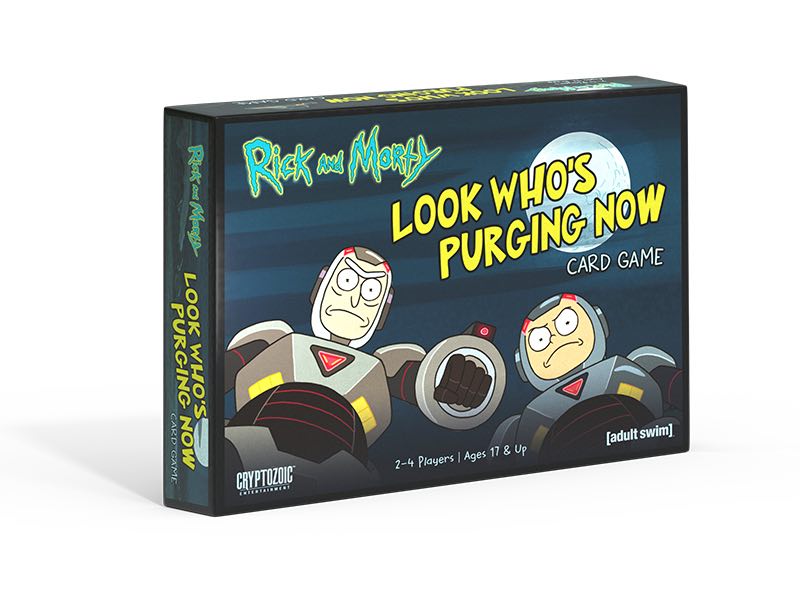 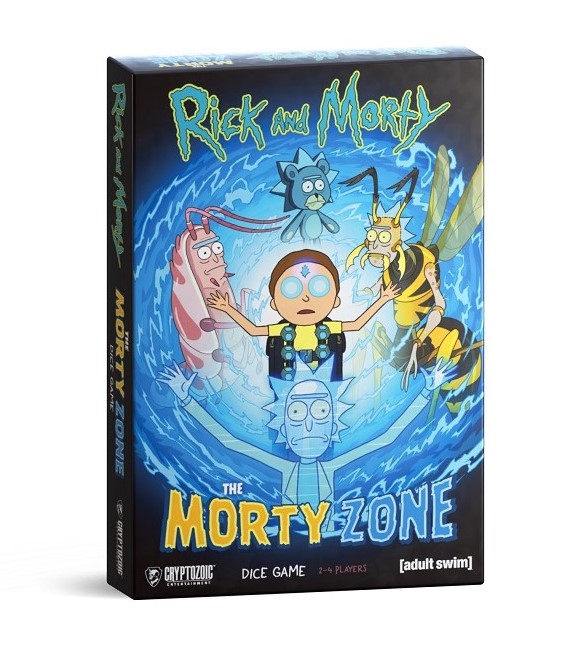 But we didn’t stop with tabletop games! Fans were hungry for more ways to collect their favorite characters and episodes and our team was filled with Rick and Morty fanatics by the time the second season started airing. So, we jumped at the chance to create trading cards based on Season 1 and Season 2 that feature images from episodes, hand-drawn Sketch Cards, and Autograph Cards from our friend Jusin Roiland, among other super talented voice actors from the show. We put together some amazing Chase Sets too, including Temporary Tattoos, Scratch and Sniff, Stickers, and Totally Fabricated, which are memorabilia cards that contain fake pieces of significant objects and textures from episodes. 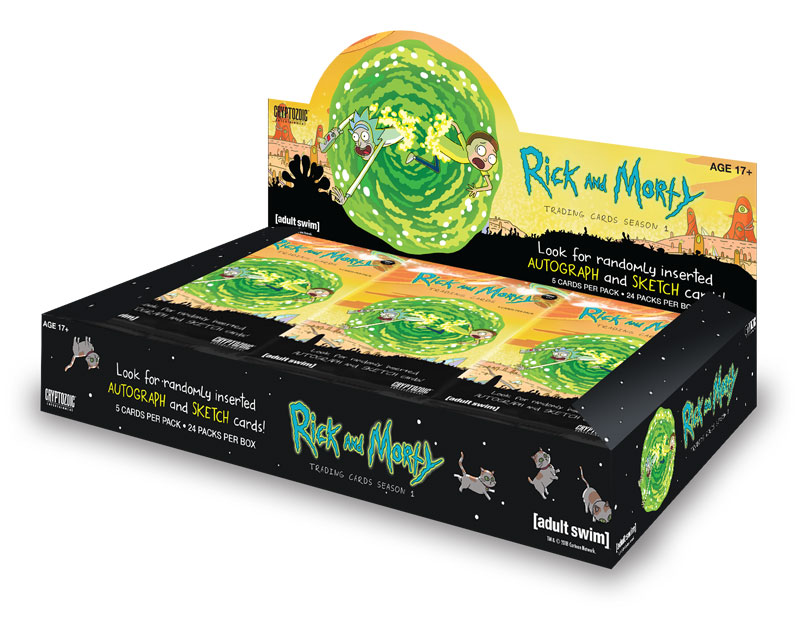 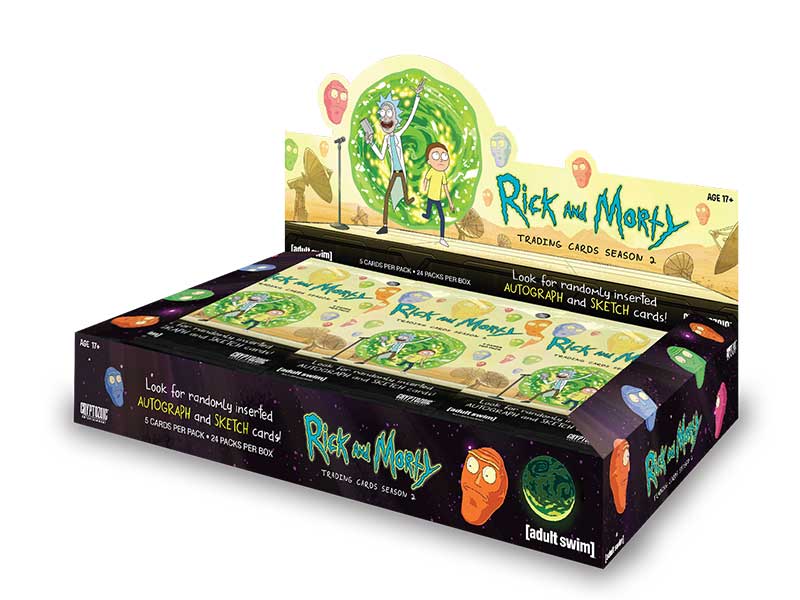 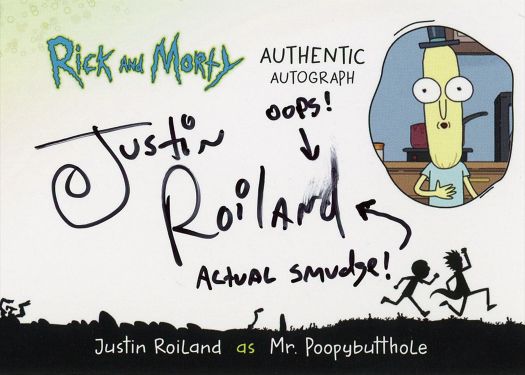 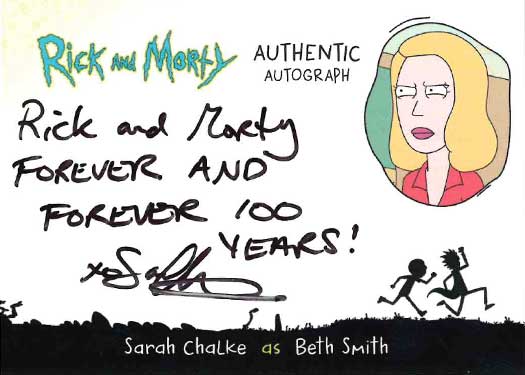 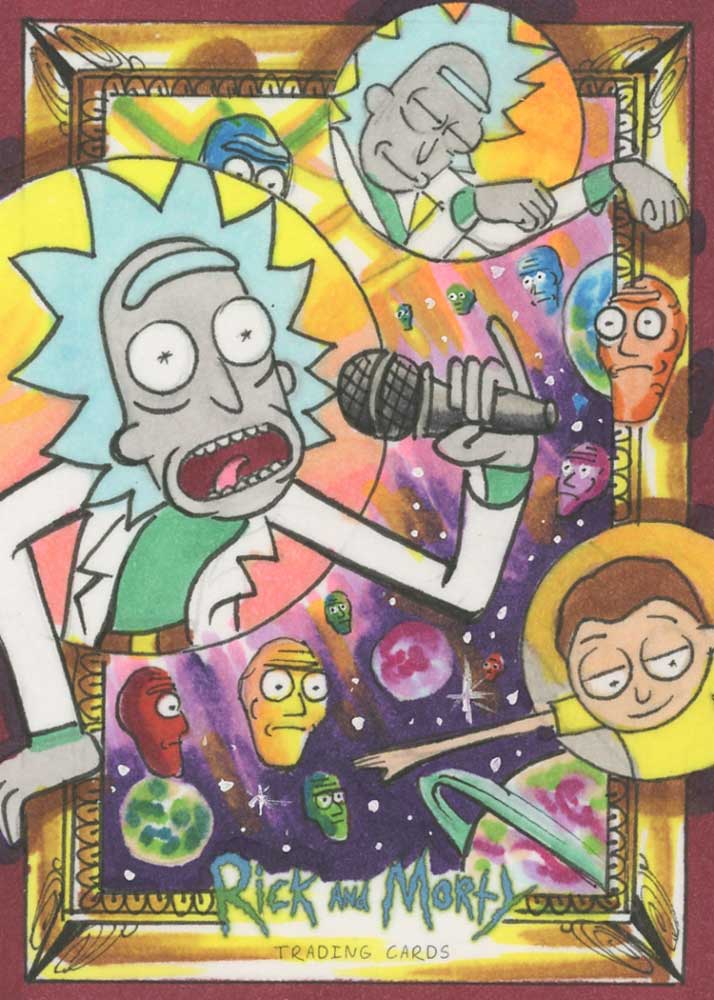 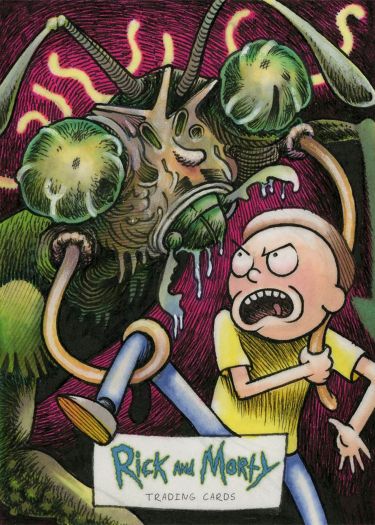 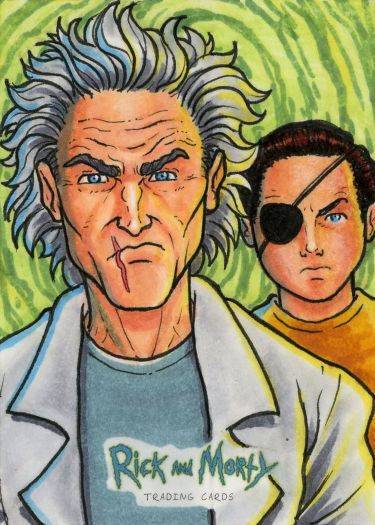 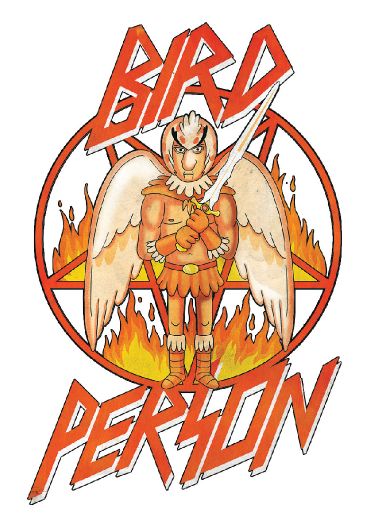 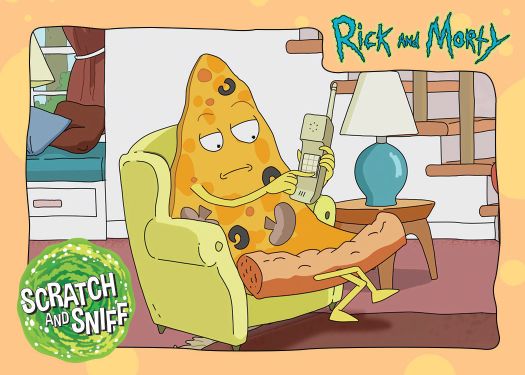 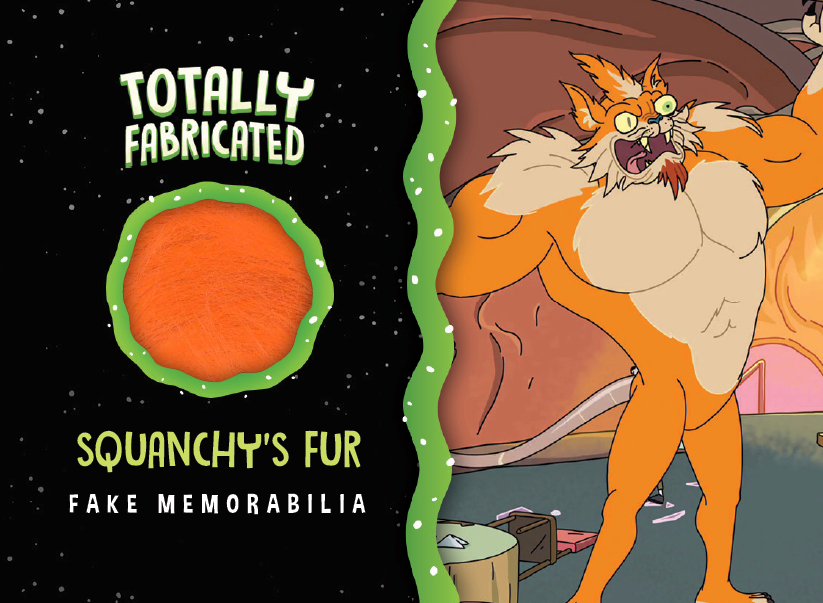 For Rick and Morty Trading Cards Season 3, we went premium! Each pack is guaranteed to contain three Sketch Cards and one Autograph Card signed by a member of the voice cast, with signers including Justin Roiland. Some packs even have a fifth card: a “Final Cut” memorabilia card featuring an authentic piece of Justin Roiland's personal copy of the script for the episode “Rickmancing the Stone”! Fans have been gobbling up packs, so you should get them while you still can (only on the Cryptozoic eStore). 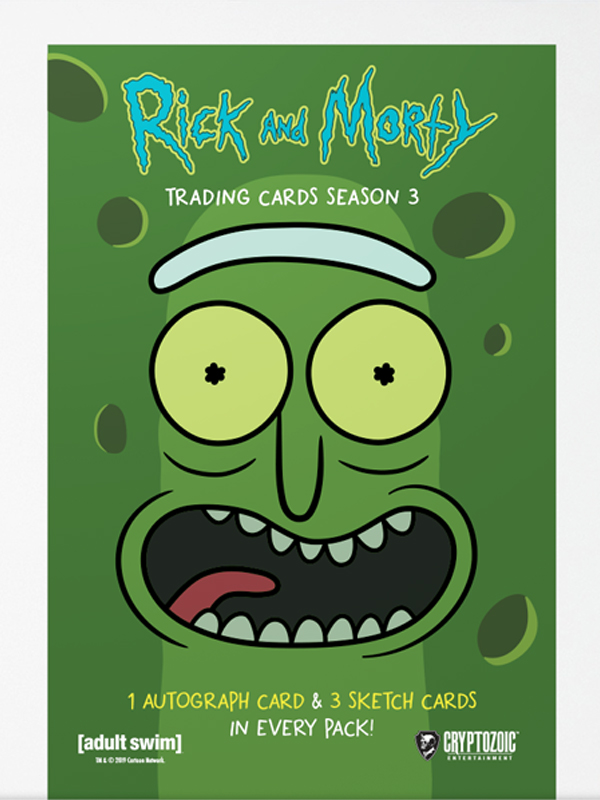 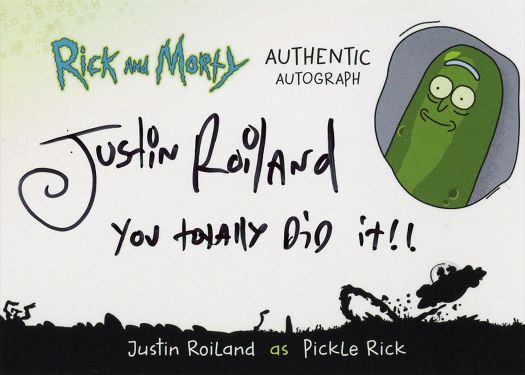 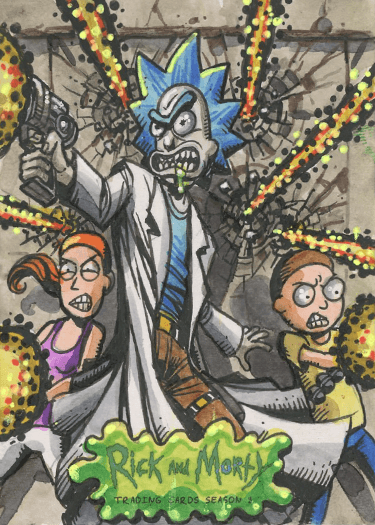 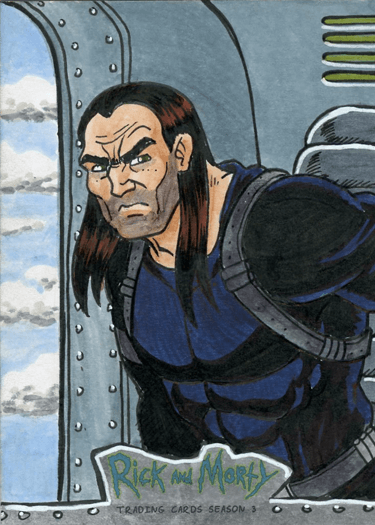 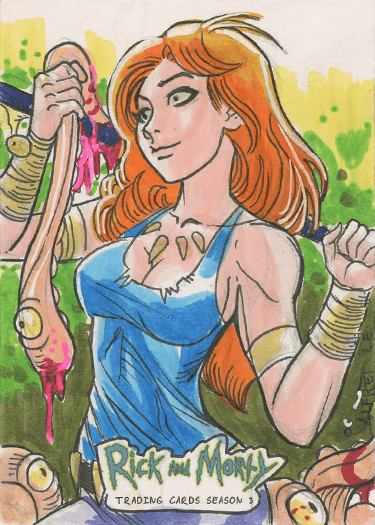 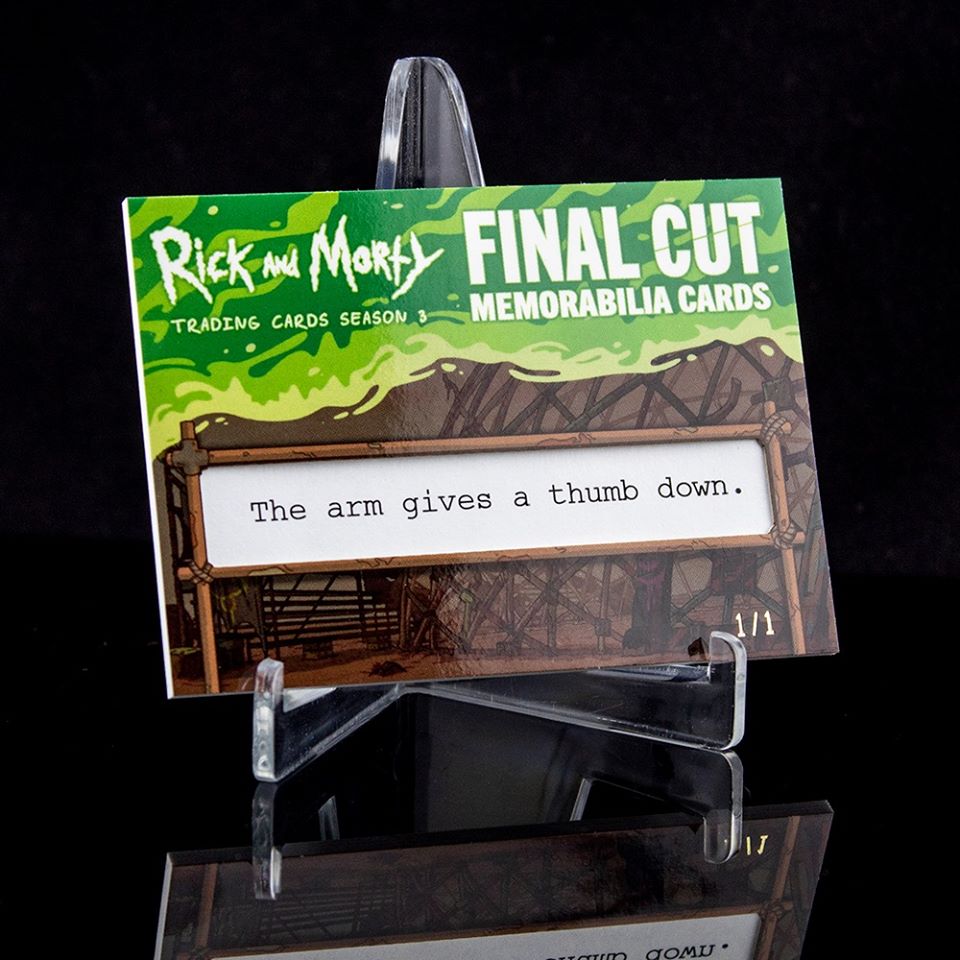 The Cryptozoic team and Rick and Morty have had quite the wild ride together! We love Rick and Morty and have had an incredible time watching episodes (for work!) and coming up with products for our fellow fans.

And that’s the way the news goes!