Battle-of-Bands Card Game Based on Cartoon Network’s Hit Series Will Be Exclusive to Kickstarter, with the Campaign Launching July 14

Lake Forest, CA – June 15, 2020 – Cryptozoic Entertainment, leading creator of tabletop games, trading cards, and collectibles, and Warner Bros. Consumer Products on behalf of Cartoon Network today announced the July 14 launch of the Kickstarter campaign for Steven Universe: Beach-a-Palooza Card Battling Game. The game will be a Kickstarter Exclusive, only available to backers, and will not be sold at retail. Fans can check out the Kickstarter page at this link and sign-up to be notified when the campaign goes live. 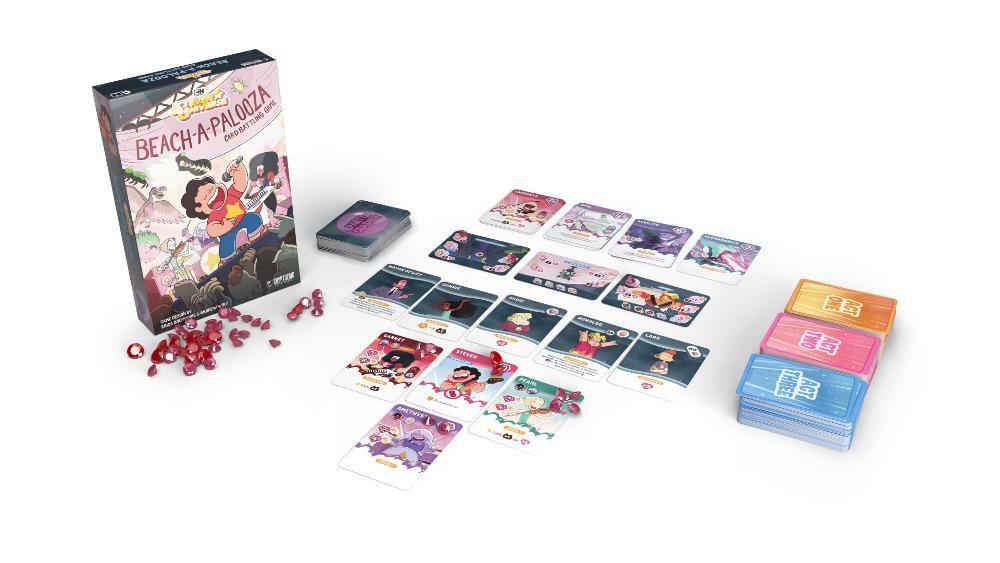 Based on Cartoon Network’s beloved series, Steven Universe: Beach-a-Palooza Card Battling Game is an easy-to-learn card-drafting game featuring a fun battle-of-the-bands theme and eye-catching art with fan-favorite characters. Designed by Erica Bouyouris and Andrew Wolf, it lets 2-6 players each become a Steven and try to recruit characters to their Stage and Audience at Beach City’s event of the year. At the same time, they must fend off Party Crashers—Corrupted and Homeworld Gems—who want to ruin their amazing performance.

“We worked hard to make an amazing game for Steven Universe fans that was created by Steven Universe fans,” said John Sepenuk, CEO of Cryptozoic. “Due to the coronavirus pandemic, it wasn’t possible to get the support to release the game at retail and align with the airing of the final season. But we know there is a loyal community who loves the show, including several members of our team. The Kickstarter campaign lets us offer the game directly to the passionate Steven Universe fans out there. This is the only way for them to get the game and we won’t be able to make the game without their support!”

In Steven Universe: Beach-a-Palooza Card Battling Game, players each begin with a unique Steven card and Energy in the form of gems. Over the course of play, they spend Energy to recruit up to three other Characters to their Stage, as well as multiple Characters to their Audience. All Characters have unique abilities, such as specific attacks and bonuses.

In the Attack Phase, players spend Energy to have their Stage Characters attack Party Crashers. Each spot on a Party Crasher card requires an attack of a particular value, with players gaining bonuses for spots they are able to hit.

To aid them in winning, players can create Fusions, powerful Characters who can be played only if they have the required Characters to fuse together.

Gameplay takes place over three Acts, each featuring different decks of Character Cards and lasting three Rounds. After three Acts of play, the winner is the player with the most Victory Points, as tracked on the Cookie Cat Scoreboard.

Steven Universe: Beach-a-Palooza Card Battling Game exclusively hits Kickstarter on July 14, with the campaign running until July 30. The plan is to ship the game to backers before the end of 2020. 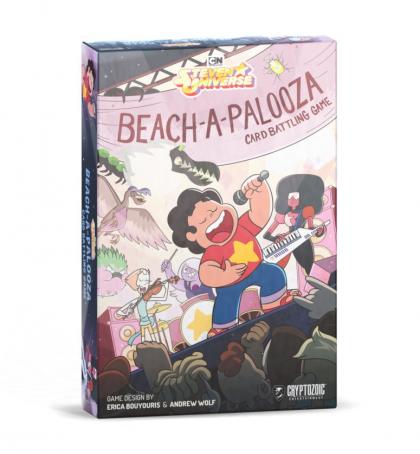 About Warner Bros. Consumer Products
Warner Bros. Consumer Products (WBCP), a WarnerMedia Company, extends the Studio’s powerful portfolio of entertainment brands and franchises into the lives of fans around the world.  WBCP partners with best-in-class licensees globally on an award-winning range of toys, fashion, home décor, and publishing inspired by franchises and properties such as DC, Wizarding World, Looney Tunes, Hanna-Barbera, HBO, Cartoon Network and Adult Swim. The division’s successful global themed entertainment business includes groundbreaking experiences such as The Wizarding World of Harry Potter and Warner Bros. World Abu Dhabi. With innovative global licensing and merchandising programs, retail initiatives, promotional partnerships and themed experiences, WBCP is one of the leading licensing and retail merchandising organizations in the world.

About Cartoon Network
Cartoon Network is a division of WarnerMedia and the #1 global animated series network, offering the best in original content for kids and families with such hits as Ben 10, Craig of the Creek, Steven Universe, The Amazing World of Gumball, The Powerpuff Girls, and We Bare Bears. Seen in 187 countries, over 450 million homes and in 33 languages, Cartoon Network inspires the next generation of creators and innovators by engaging its audience at the intersection of creativity and technology. Its award-winning pro-social initiatives, Stop Bullying: Speak Up and CN Buddy Network are acknowledged and often used resources for kids and adults looking for tools that can assist in dealing with the ongoing issue of bullying.