Lake Forest, CA – November 5, 2019 – Cryptozoic Entertainment, leading creator of tabletop games, trading cards, and physical and digital collectibles, along with Cartoon Network Enterprises, announced the release of Rick and Morty: The Morty Zone Dice Game. Based on the Season Four premiere episode of Adult Swim’s hit series Rick and Morty, which airs November 10, the previously unannounced product is in stores now. In the competitive roll-and-write game, 2-4 players roll colored dice and check off numbers on their dry-erase Fate Boards to score points. 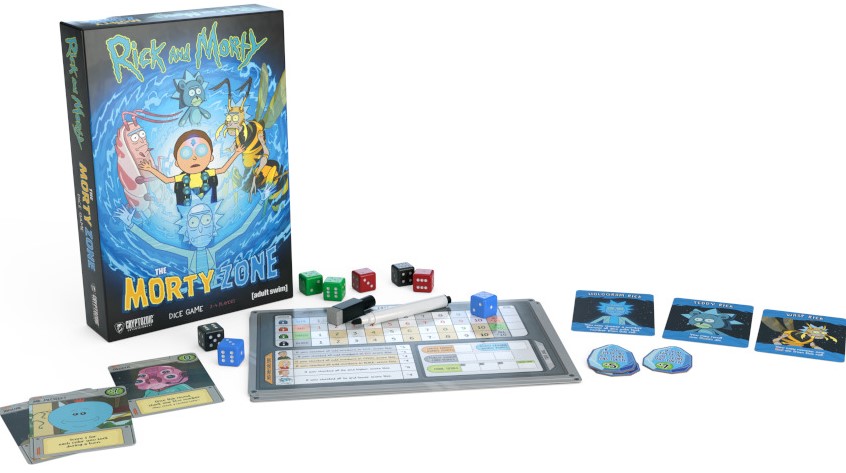 “Our team has been working closely with our partners at Cartoon Network for over a year to create Rick and Morty: The Morty Zone Dice Game and have it ready in time for the Season Four premiere of the show,” said John Sepenuk, CEO of Cryptozoic. “We embraced the challenge of finishing the game and getting it out to stores while keeping it a total secret. We are extremely excited to reveal the game at last and let fans of Rick and Morty play it even before the airing of the episode that inspired it!”

In Rick and Morty: The Morty Zone Dice Game, the active player rolls eight jumbo dice (two each in four different colors) and totals up the numbers on each pair of dice of the same color. Then, using the included dry-erase markers, all players simultaneously check off numbers on their Fate Boards corresponding to the dice totals. For example, if the blue dice total 9, a player can either check the 9 on the blue portion of their board or two blue numbers that total 9. Players continue passing the dice and taking turns in a round until all players have “Locked” each of their four colors, meaning they cannot check the needed number or numbers of a color after a dice roll.

The objective of the game is to score the most points, with each checked number earning 1 point. Points are also earned from Public Bonus Cards, which offer rewards for meeting goals that are visible to everyone, and Smith Family Bonuses, specific conditions on player Fate Boards that can add points at the end of the round. Inspired by the episode, Secret Death Crystal Tokens provide a secret goal a player strives for that can pay off in bonus points at round’s end.

"It's not just a random luck dice game," commented lead designer Matt Hyra. "When it's your turn to roll the humongous dice, you'll also draw a Rick card. That card might allow you to reroll a certain color of dice or even remove some dice from the mix. Use this awesome power to help yourself and mess with your opponents!"

Rick and Morty: The Morty Zone Dice Game is available at hobby retailers across the U.S. now for a retail price of $25 and will arrive at mass retailers November 19. 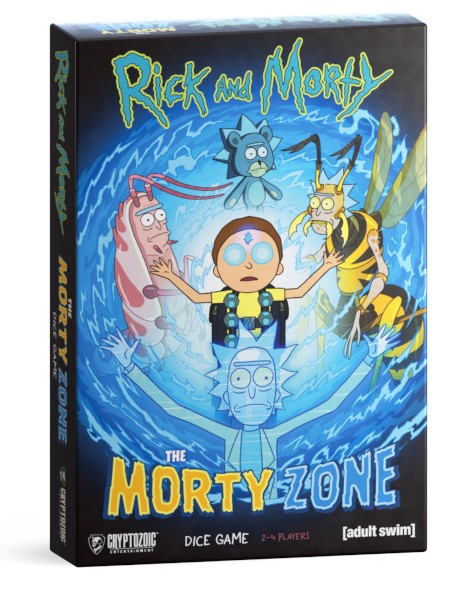 For more information, check out the Rick and Morty: The Morty Zone product page.

About Rick and Morty
Rick and Morty is the critically-acclaimed, half-hour animated hit comedy series on Adult Swim that follows a sociopathic genius scientist who drags his inherently timid grandson on insanely dangerous adventures across the universe. Rick Sanchez is living with his daughter Beth’s family and constantly bringing her, his son-in-law Jerry, grand-daughter Summer, and grand-son Morty into intergalactic escapades. Can the family survive Rick’s insanity and all the chaos the universe throws at them?

About Cartoon Network Enterprises
Cartoon Network Enterprises (CNE) is responsible for building consumer products and merchandising programs for a wide range of brands by securing and supporting long-term licensing partnerships across all categories. As the global branding and merchandising arm of Cartoon Network and Adult Swim, the division manages the consumer product programs for the networks’ award-winning original programming, brands and characters including Ben 10, Adventure Time, The Powerpuff Girls, Steven Universe, The Amazing World of Gumball, and We Bare Bears, as well as Rick and Morty on Adult Swim.

Adult Swim (AdultSwim.com), launched in 2001, is Turner’s network offering original and acquired animated and live-action series for young adults. Airing nightly from 8 p.m. to 6 a.m. (ET/PT), Adult Swim is basic cable’s #1 network with persons 18-34 and 18-49, and is seen in 94 million U.S. homes.

All Rick and Morty characters and elements © & ™ Adult Swim.